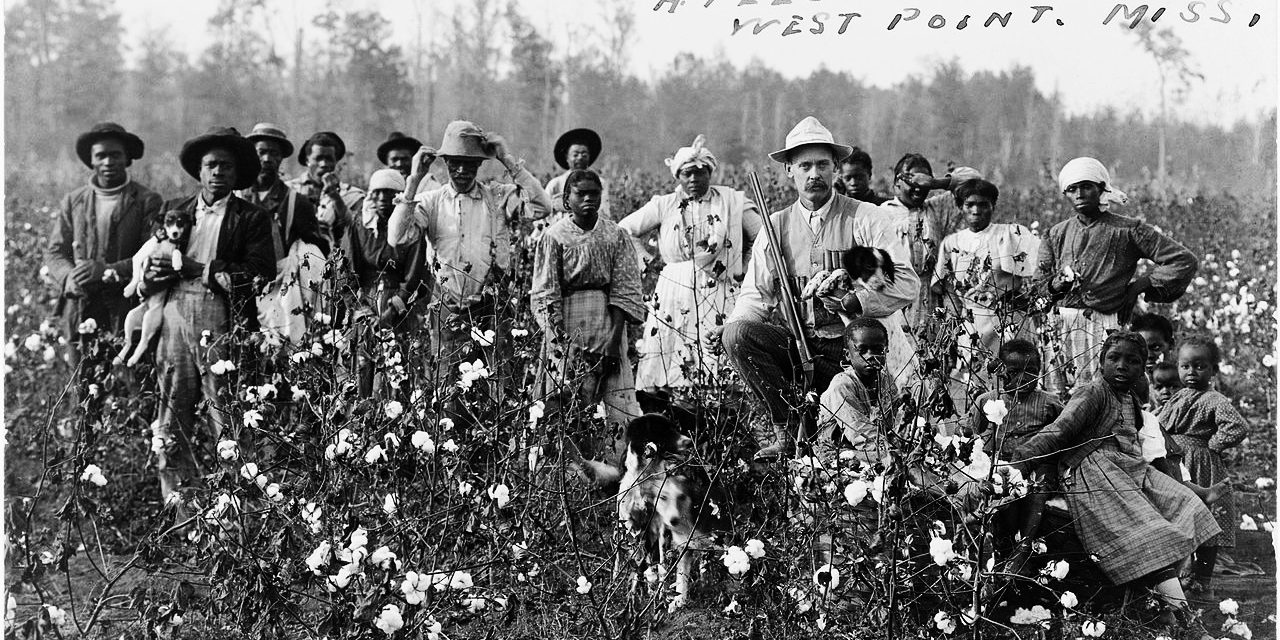 Sharecropping is a type of farming in which families rent small plots of land from a landowner in return for a portion of their crop, to be given to the landowner at the end of each year. Different types of sharecropping have been practiced worldwide for centuries, but in the rural South, it was typically practiced by former slaves. With the southern economy in disarray after the abolition of slavery and the devastation of the Civil War, conflict arose during the Reconstruction era between many white landowners attempting to reestablish a labor force and freed blacks seeking economic independence and autonomy.

FORTY ACRES AND A MULE

During the final months of the Civil War, tens of thousands of freed slaves left their plantations to follow General William T. Sherman‘s victorious Union Army troops across Georgia and the Carolinas.

In January 1865, in an effort to address the issues caused by this growing number of refugees, Sherman issued Special Field Order Number 15, a temporary plan granting each freed family 40 acres of land on the islands and coastal region of Georgia. The Union Army also donated some of its mules, unneeded for battle purposes, to the former slaves.

In 1870, only around 30,000 African Americans in the South owned land (usually small plots), compared with 4 million others who did not.

When the war ended three months later, many freed African Americans saw the “40 acres and a mule” policy as proof that they would finally be able to work their own land after years of servitude. Owning land was the key to economic independence and autonomy.

Instead, as one of the first acts of Reconstruction, President Andrew Johnsonordered all land under federal control to be returned to its previous owners in the summer of 1865.

The Freedmen’s Bureau, created to aid millions of former slaves in the postwar era, had to inform the freedmen and women that they could either sign labor contracts with planters or be evicted from the land they had occupied. Those who refused or resisted were eventually forced out by army troops.

In the early years of Reconstruction, most blacks in rural areas of the South were left without land and forced to work as laborers on large white-owned farms and plantations in order to earn a living. Many clashed with former slave masters bent on reestablishing a gang-labor system similar to the one that prevailed under slavery.

These black codes provoked a fierce resistance among the freedmen and undermined support in the North for President Johnson’s Reconstruction policies. A Republican victory in the Congressional elections of 1866 led to the passage of the Reconstruction Acts in 1867, beginning a new phase of Reconstruction.

During this period, the passage of the 14th Amendment and the 15th Amendment granted African Americans the right to vote, equality before the law and other rights of citizenship.

RISE OF THE SHARECROPPING SYSTEM

Despite giving African Americans the rights of citizens, the federal government (and the Republican-controlled state governments formed during this phase of Reconstruction) took little concrete action to help freed blacks in the quest to own their own land.

Instead of receiving wages for working an owner’s land—and having to submit to supervision and harsh discipline—most freedmen preferred to rent land for a fixed payment rather than receive wages.

By the early 1870s, the system known as sharecropping had come to dominate agriculture across the cotton-planting South. Under this system, black families would rent small plots of land, or shares, to work themselves; in return, they would give a portion of their crop to the landowner at the end of the year.

The sharecropping system also locked much of the South into a reliance on cotton—just at the time when the price for cotton was plunging.

In addition, while sharecropping gave African Americans autonomy in their daily work and social lives, and freed them from the gang-labor system that had dominated during the slavery era, it often resulted in sharecroppers owing more to the landowner (for the use of tools and other supplies, for example) than they were able to repay.

Some blacks managed to acquire enough money to move from sharecropping to renting or owning land by the end of the 1860s, but many more went into debt or were forced by poverty or the threat of violence to sign unfair and exploitative sharecropping or labor contracts that left them little hope of improving their situation.