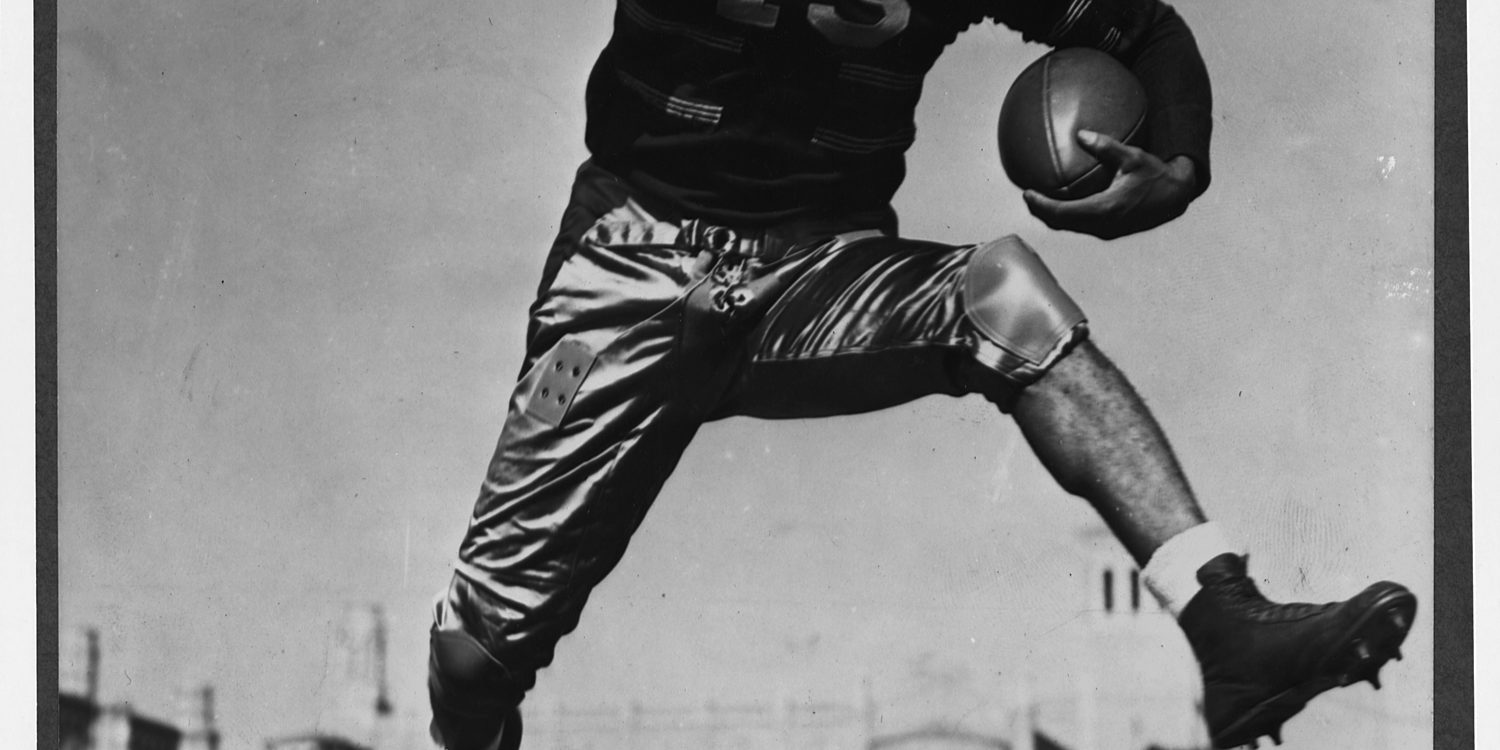 The Past in Color features the work of colorist Marina Amaral, bringing to life black and white photos with color applied digitally.

LAPD officer. Bit-part Hollywood star. Nixon supporter. Trailblazer for racial integration. Kenny Washington had an eventful–and in some ways contradictory–life ahead of him. But in 1939 he was a star, plain and simple.

“The Kingfish” was an athletic phenomenon. The UCLA Bruins left halfback set a college record of 3,206 yards for total offense over his career, won the Douglas Fairbanks trophy for the best college player in the U.S. and was named to an American college all-star team in August 1940. (He also played baseball for UCLA alongside Jackie Robinson—averaging .454 in 1937 and .350 in 1938.)

Today his pathway would be clear: from college legend to NFL draft to stardom, endorsement deals and riches. But in 1939 that wasn’t an option. The NFL had banned black players six years earlier. So Washington graduated from UCLA, coached a little and joined the LA police department, where his uncle Rocky was the highest-ranking black officer. He bided his time during the Second World War playing part-time minor league football—trashing the cartilage in his knees in the process. 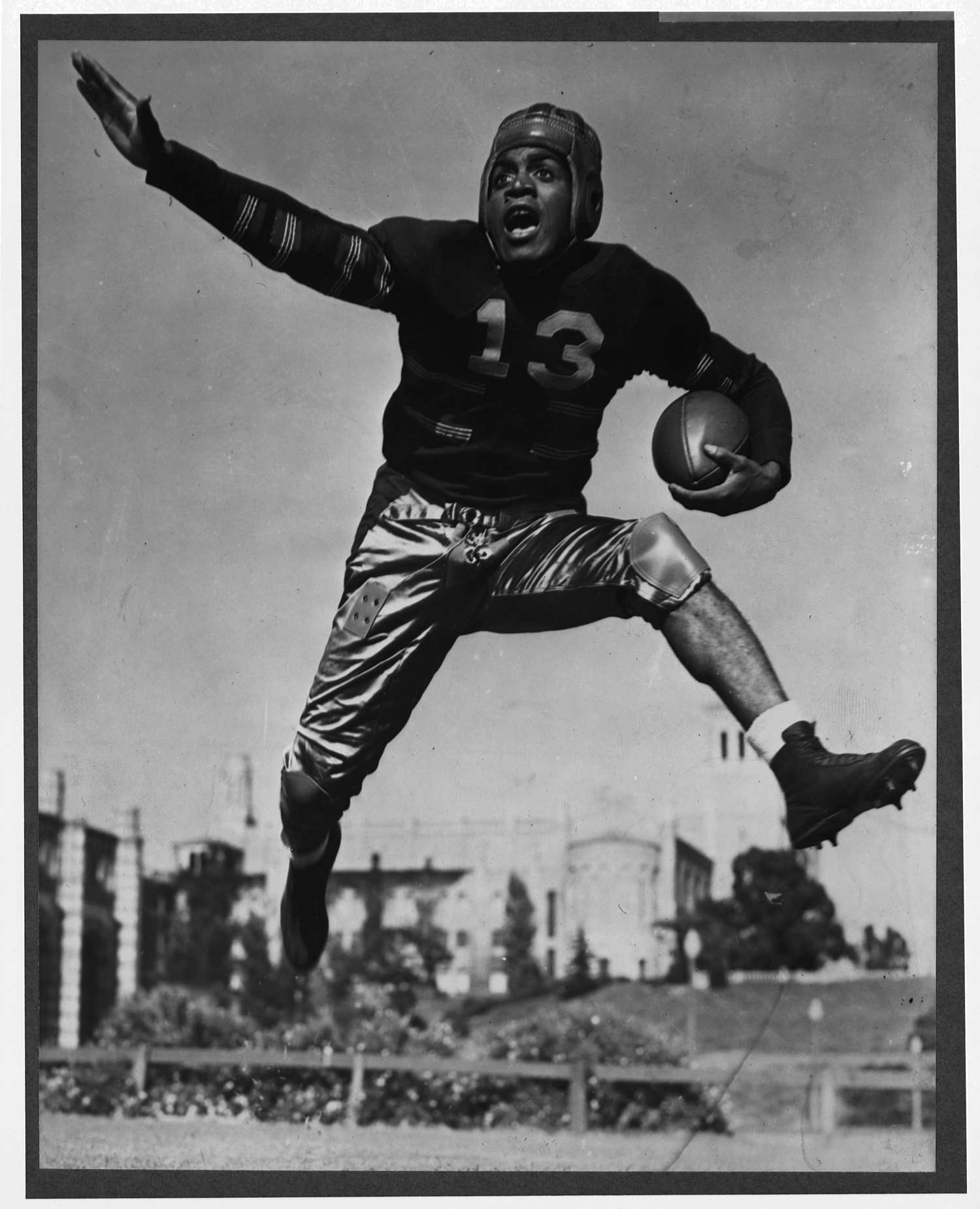 University of California at Los Angeles Bruins football player Kenny Washington leaps high into the air with a football. (Photo by Library of Congress/Corbis/VCG via Getty Images)

The photograph
This image of Washington was taken at the height of his college career, when he wore 13 on his chest and played 580 minutes out of 600. The colors of the uniform have been recreated in consultation with UCLA. “In the 1930’s the UCLA jersey was a navy blue with gold lettering accents, and pants were gold as well,” says Emily Knox, Senior Art Director at UCLA Athletic Hall of Fame. “The shoes were black. The helmet is made from leather with a lighter brown shade.”

Other images from the same period show Washington photographed with his fellow black teammates, Robinson and Woodrow Strode. In all of them, Washington and his comrades exude the athleticism and confidence of preternaturally talented young athletes. Yet each regularly faced racial taunts and discrimination on and off the pitch: they could not play in Texas, for example, because hotels and restaurants would not serve them.

Breaking down barriers
After the Second World War ended the NFL was compelled to abandon its discriminatory policies: the LA Rams, the 1945 champions newly relocated from Cleveland, were required to sign African American players or lose their lease on the LA Memorial Coliseum. On March 21st 1946 Washington became their marquee signing: the first black player to sign an NFL contract in the postwar era. (Strode followed two months later.)

Washington played three seasons on knees that had been surgically rebuilt and he held his own, averaging over six yards per carry before his retirement in 1948. There was no championship title, and Washington did not repeat the stardom he had enjoyed at college level a decade earlier. He was roughhoused and targeted on the field.

Nevertheless, he had broken the so-called “color barrier” in the NFL a full year before his one-time teammate Robinson first crossed baseball’s color line by walking out to play for the Brooklyn Dodgers in 1947.

Washington died in 1971, aged 52. What he would have made of the NFL today, with its #takeaknee protests and ongoing racial disquiet, is unknowable. Undoubtedly, though, his story is a key part of the journey toward equality and integration in American sports.