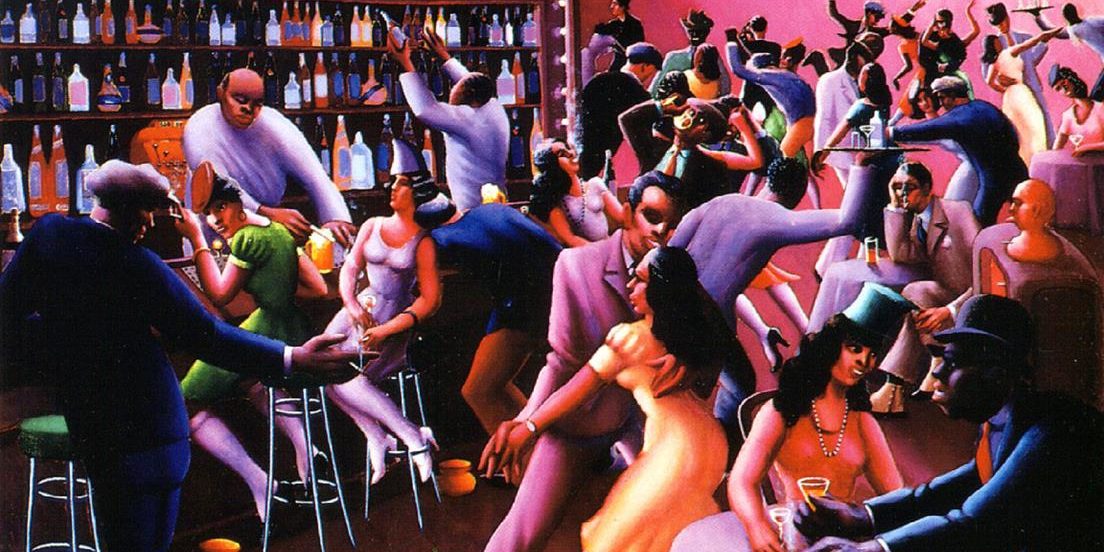 The Harlem Renaissance was the development of the Harlem neighborhood in New York City as a black cultural mecca in the early 20th Century and the subsequent social and artistic explosion that resulted. Lasting roughly from the 1910s through the mid-1930s, the period is considered a golden age in African American culture, manifesting in literature, music, stage performance and art.

The northern Manhattan neighborhood of Harlem was meant to be an upper-class white neighborhood in the 1880s, but rapid overdevelopment led to empty buildings and desperate landlords seeking to fill them.

In the early 1900s, a few middle-class black families from another neighborhood known as Black Bohemia moved to Harlem, and other black families followed. Some white residents initially fought to keep African Americans out of the area, but failing that many whites eventually fled.

Outside factors led to a population boom: From 1910 to 1920, African American populations migrated in large numbers from the South to the North, with prominent figures like W.E.B. Du Bois leading what became known as the Great Migration.

In 1915 and 1916, natural disasters in the south put black workers and sharecroppers out of work. Additionally, during and after World War I, immigration to the United States fell, and northern recruiters headed south to entice black workers to their companies.

By 1920, some 300,000 African Americans from the South had moved north, and Harlem was one of the most popular destinations for these families.

This considerable population shift resulted in a Black Pride movement with leaders like Du Bois working to ensure that black Americans got the credit they deserved for cultural areas of life. Two of the earliest breakthroughs were in poetry, with Claude McKay’s collection Harlem Shadows in 1922 and Jean Toomer’s Crane in 1923.

Novelist and du Bois protege Jessi Redmond Fauset’s 1924 novel There Is Confusion explored the idea of black Americans finding a cultural identity in a white-dominated Manhattan. Fauset was literary editor of the NAACP magazine The Crisis and developed a magazine for black children with Du Bois.

The debut event of Fauset’s novel was engineered for a larger purpose by sociologist Charles Spurgeon Johnson, who was integral in shaping the Harlem literary scene. Johnson used the novel’s debut party to organize resources to create Opportunity, the National Urban League magazine he founded and edited, a success that bolstered writers like Langston Hughes.

Hughes was at that party along with other promising black writers and editors, as well as powerful white New York publishing figures. Soon many writers found their work appearing in mainstream magazines like Harper’s.

Anthropologist and folklorist Zora Neal Hurston courted controversy through her involvement with a publication called FIRE!!

Helmed by white author and Harlem writers’ patron Carl Van Vechten, the magazine exoticized the lives of Harlem residents. Van Vechten’s previous fiction stirred up interest among whites to visit Harlem and take advantage of the cultural and night life there.

Though Van Vechten’s work was condemned by older luminaries like DuBois, it was embraced by Hurston, Hughes and others.

The music that percolated in and then boomed out of Harlem in the 1920s was jazz, often played at speakeasies offering illegal liquor. Jazz became a great draw for not only Harlem residents, but outside white audiences also.

With the groundbreaking new music came a vibrant nightlife. The Savoy opened in 1927, an integrated ballroom with two bandstands that featured continuous jazz and dancing well past midnight, sometimes in the form of battling bands helmed by Fletcher Henderson, Jimmie Lunceford and King Oliver.

While it was fashionable to frequent Harlem nightlife, entrepreneurs realized that some white people wanted to experience black culture without having to socialize with African Americans and created clubs to cater to them.

The most successful of these was the Cotton Club, which featured frequent performances by Ellington and Calloway. Some in the community derided the existence of such clubs, while others believed they were a sign that black culture was moving towards greater acceptance.

The cultural boom in Harlem gave black actors opportunities for stage work that had previously been withheld. Traditionally, if black actors appeared onstage, it was in a minstrel show musical and rarely in a serious drama with non-stereotypical roles.

At the center of this stage revolution was the versatile Paul Robeson, an actor, singer, writer, activist, and more. Robeson first moved to Harlem in 1919 while studying law at Columbia University and continually maintained a social presence in the area, where he was considered an inspirational but approachable figure.

Robeson believed that arts and culture were the best paths forward for Black Americans to overcome racism and make advances in a white-dominated culture.

Black musical revues were staples in Harlem, and by the mid-1920s had moved south to Broadway, expanding into the white world. One of the earliest of these was Eubie Blake and Noble Sissle’s Shuffle Along, which launched the career of Josephine Baker.

White patron Van Vechten helped bring more serious black stage work to Broadway, though largely the work of white authors and considered to fall short of the potential. It wasn’t until 1929 that a black-authored play about black lives, Wallace Thurman and William Rapp’s Harlem, played Broadway.

The visual arts were never welcoming to black artists, with art schools, galleries and museums shutting them out. Sculptor Meta Warrick Fuller, a protege of Auguste Rodin, explored African American themes in her work and influenced Du Bois to champion black visual artists.

The most celebrated Harlem Renaissance artist is Aaron Douglas, often called as “the Father of Black American Art,” who adapted African techniques to realize paintings and murals, as well as book illustration.

Sculptor Augusta Savage’s 1923 bust of Du Bois garnered considerable attention. She followed that up with small, clay portraits of everyday African Americans, and would later be pivotal enlisting black artists into the Federal Art Project, a division of the Work Progress Administration (WPA).

James VanDerZee’s photography captured Harlem daily life, as well as by commissioned portraits in his studio that he worked to fill with optimism and separate philosophically from the horrors of the past.

The end of Harlem’s creative boom began with the stock market crash of 1929and wavered until Prohibition ended in 1933, which meant white patrons no longer sought out the illegal alcohol in uptown clubs.

By 1935 many pivotal Harlem residents had moved on seeking work, replaced by the continuous flow of refugees from the South, many requiring public assistance.

That same year, a riot broke out following the arrest of a young shoplifter, resulting in three dead, hundreds injured, and millions of dollars in property damage, as well as serving as a marker of the end of the Harlem Renaissance.