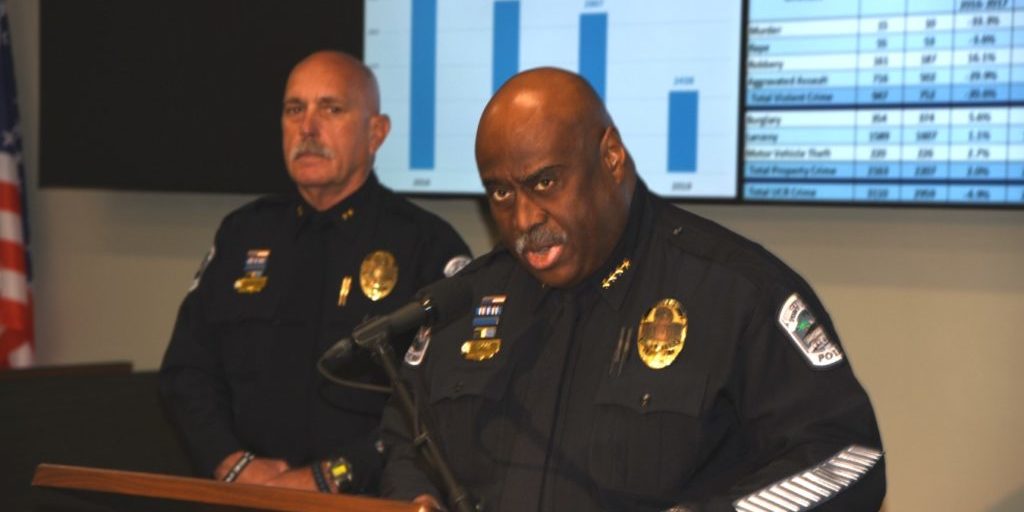 The Fort Myers Police Department announced Wednesday morning that over the last four years, violent crimes and crime overall have gone down throughout the city.

A graph shown during a news conference this morning shows the decrease in violent crimes over those four years.

Specifically, the biggest decrease in violent crimes was aggravated assault: a 51.6% decrease since 2016.

Additionally, numbers from FMPD show nine murders last year compared to 11 in 2018, 34 rapes compared to 53 the year before and burglary is also down year to year at 245 down from 376.

Chief Derrick Diggs says it’s all because of their 21st Century approach. That means investing in technology and investing in the community through different initiatives.

“We focus on the violent offenders, we utilize technology to support that, support the things that our officers do out there on the street, identify the various perpetrators and we make sure we utilize our resources in the most efficient and effective way possible,” Diggs said.

Now, FMPD says they still have a lot of work to do to keep that downward trend going.

We talked to people in Fort Myers today who say they feel FMPD is making progress.

Three years ago, hurricane shutters protected a woman from the violence. Today, those shutters are gone.

FMPD says this is a sign of the changing times in Dumbar and throughout the city.

“Well, it was pretty rough, you know,” said Stacey Wiley, Sr. “Things were going on that shouldn’t be going on.”

Wiley has lived in Dunbar for more than 50 years. He says he feels safer now than in the past, so he believes FMPD when they say crime is down.

“The people are now feeling safe about their neighborhood, feeling safe to be able to go out in the community and abroad to go and enjoy life and enjoy themselves,” said Pastor James C. Givens at Mt. Olive Church.

He says it’s obvious people feel safer now since they’re not afraid to come to church events at night.

“Just last night, we were here until about 9:30 and everyone felt comfortable in leaving. And it wasn’t a rush like, ‘Oh, I need to get home before dark,’” Givens said.

However, Givens agreed that there is still more work to be done. “I think the police department needs to be a little more personable…people would be a little more open about the crimes they see.”

Diggs offered three reasons: Beter training for his officers, better technology and getting to know the people in neighborhoods like Dunbar, making personal connections.

WATCH THE FULL NEWS CONFERENCE BELOW: