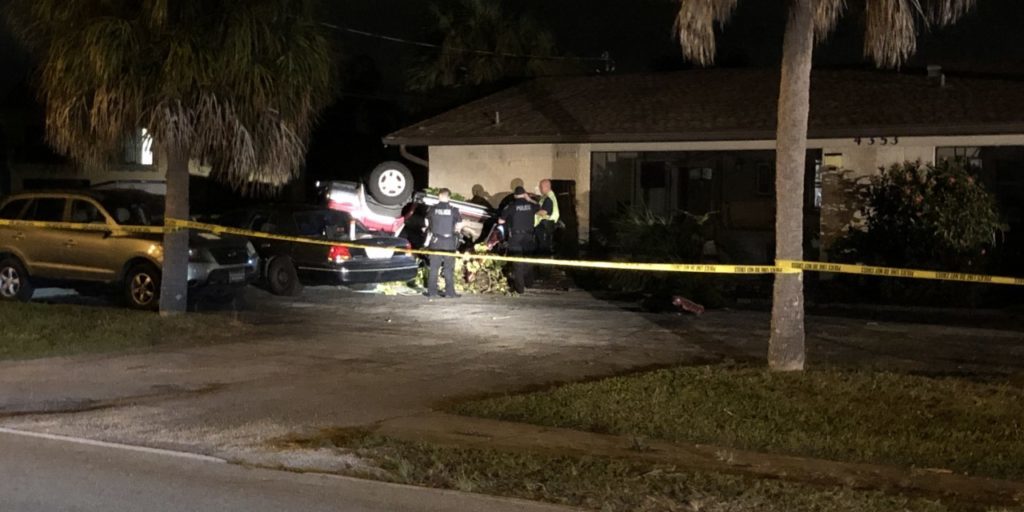 Cape Coral Police were on the scene of a crash where a car hit a house after rolling over on 4300 County Club Boulevard near 43rd Street in Cape Coral.

According to police, Kaitlin French, of Cape Coral, was driving north on Country Club Boulevard heading towards 43rd Street when she made a sharp turn and overcorrected and lost control of her car.

French’s car traveled through the front lawn of a residence and collided with a small palm tree before rolling over on its side and then eventually striking the parked car in the driveway as well as the side of the house, before coming to a final stop on its roof.

The palm tree struck by the car fell over and landed on the roof of the home.

Kelsey Furlow, the owner of the home hit by the car, was sleeping in the bedroom at the front of the residence when the incident took place. As the vehicle struck the side of the house, it knocked a refrigerator over which struck Furlow causing minor injuries.

French suffered life-threatening injuries and was trauma alerted to Lee Memorial Hospital. She was not wearing a seat belt at the time of the crash.

Alcohol/drugs are confirmed to have been a factor in the crash. French had a BAC of .179.

Police say next of kin have been notified.

The northbound lanes of Country Club Blvd. were closed for more than four hours.

If you witnessed the traffic crash, please contact the Cape Coral Police Department at 239-574-3223. You can also submit an anonymous tip at www.capecops.com/tips